Rare Joseph Wright of Derby painting acquired for the nation 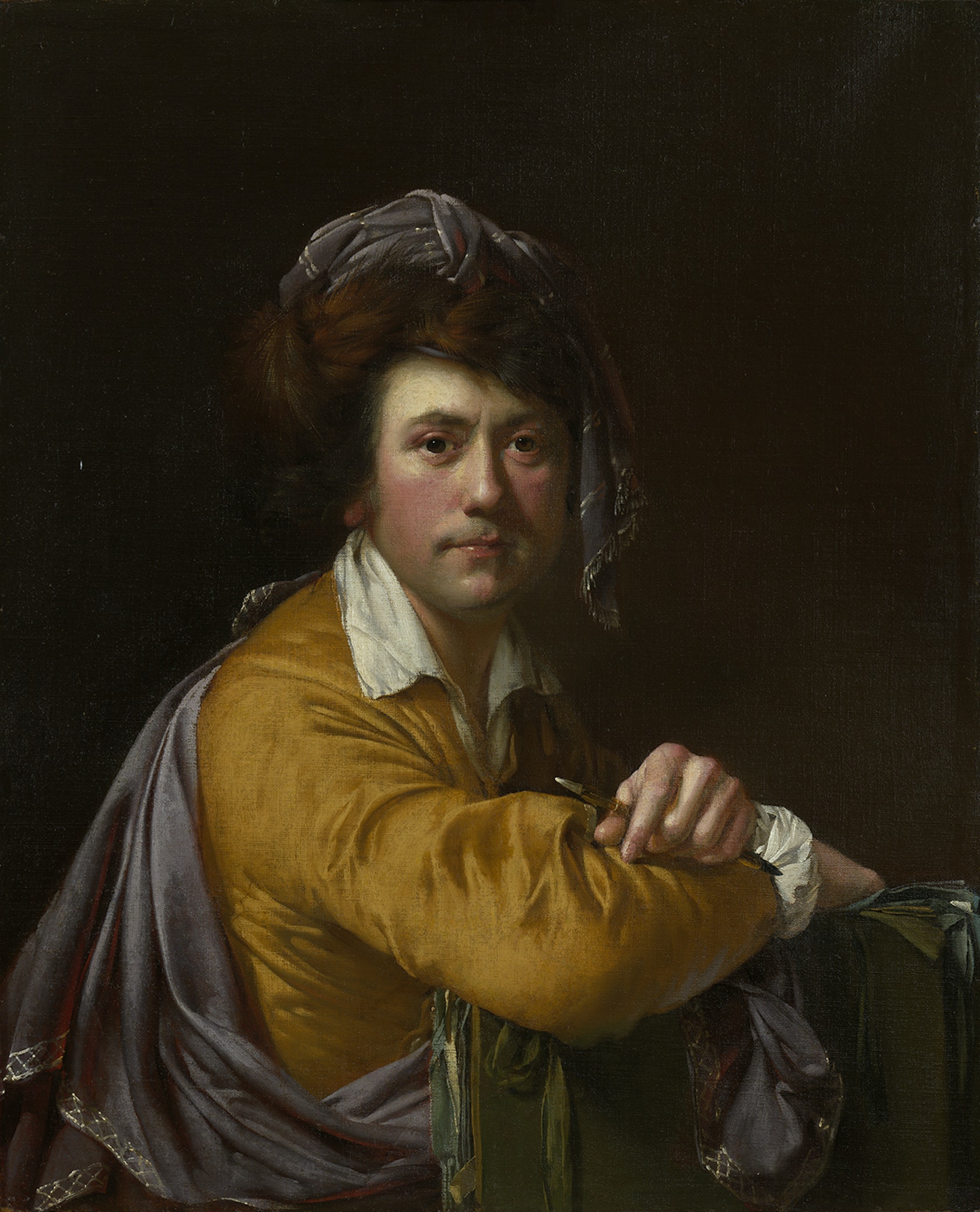 ‘Self-Portrait at the Age of About Forty’, and on the reverse a study for Wright’s famous painting ‘An Experiment on a Bird in the Air Pump’, unveiled at Derby Museum and Art Gallery

Today, Derby Museum and Art Gallery is delighted to announce it will be the guardian of a major new acquisition for the nation when it unveils Self-Portrait at the Age of About Forty in its Joseph Wright Gallery.

In what can only be described as an exceptional ‘once in a lifetime’ opportunity, this remarkable painting by world renowned artist Joseph Wright, who was born and lived in Derby, has been Accepted in lieu of Inheritance Tax by HM Government under a hybrid arrangement and allocated to Derby Museums, administered by Arts Council England. Further support has come from a range of funding bodies including a major donation of £2,271,621 from the National Heritage Memorial Fund, support from Art Fund, and a number of private donations, including Robert. M. Kirkland one of Derby Museums’ generous supporters.

The self-portrait captures a sense of the self-confidence and recognition of Wright’s growing reputation for his so-called ‘candlelight paintings.’ It is also the only one of Wright’s ten self-portraits in which he specifically depicts himself as an artist, and it is packed with references to his specialism as a master painter of light effects: the porte-crayon in his hand, with a white chalk in one end, and a black chalk in the other, and the play of warm fire – or candle – light on the folds of his exotic, and unusual, artistic costume.

The painting also comes with an added bonus which further demonstrates the working process of Wright. The verso (or reverse of the painting) shows a study for Wright’s famous painting An Experiment on a Bird in the Air Pump. It was painted in or just prior to 1768 and sheds important light on the development of Wright’s ideas for The Air Pump; a painting that is widely credited as the artist’s masterpiece and the first of his works to enter a British public collection when it was acquired by the National Gallery in 1863. 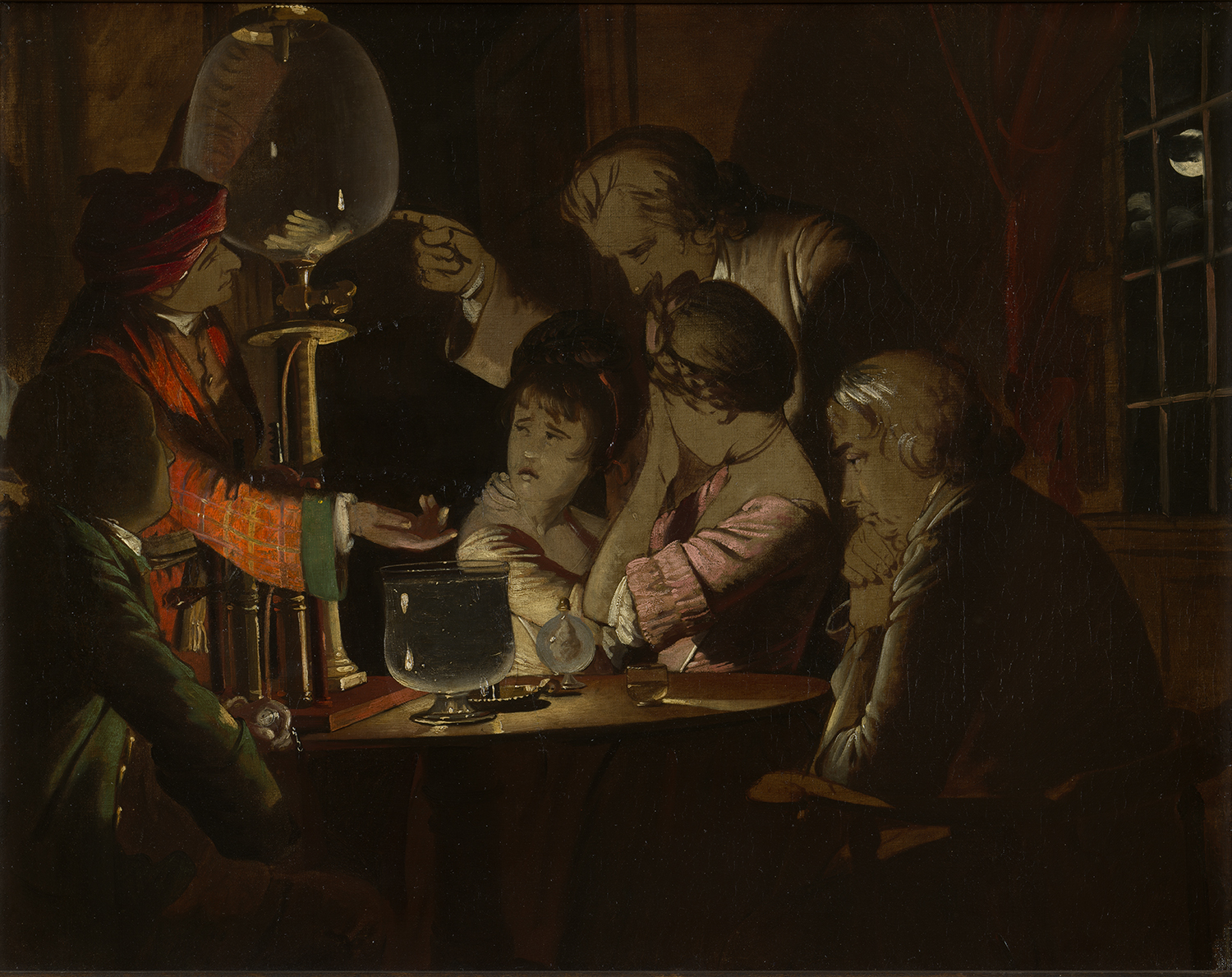 Owned as part of a private collection since it was completed in around 1772, the self-portrait has seldom been exhibited in public and now it will take pride of place at Derby Museum and Art Gallery, home of the largest collection of the work of Joseph Wright of Derby in the world.  It will complement the existing collection as it represents what could be seen as a defining moment in Wright’s career. By 1772, just one year prior to his influential tour of Italy, Wright had firmly established himself as what one fellow artist described as ‘the most famous painter now living for candlelights’, with the public exhibition of paintings such as The Orrery, The Air Pump, and Alchymist.

The painting, which is approximately 30 by 25 inches, is in its original elaborate frame and will be on permanent display in the Joseph Wright Gallery at Derby Museum and Art Gallery in a bespoke free-standing case which allow both sides of the painting to be viewed. The case will also be turned occasionally due to the different orientations of the two sides of the work (portrait and landscape). A high-resolution image of the side not currently shown in its correct format will also accompany the work on display to help visitors understand what they are looking at.

Lucy Bamford, Curator at Derby Museums and Art Gallery, and Joseph Wright expert said: ‘We are extremely excited to be able to add this remarkable painting to our existing Joseph Wright collection. The way it depicts his growing confidence as an artist is wonderful, and the incredible verso is the icing on the cake as it tells us so much about his way of working.

‘We are delighted to have it on permanent public display where it can be enjoyed by local, national, and international followers of Wright’s work. Not only is it a work of significant artistic quality, but it also adds greatly to the stories that we share around Wright and our visitors’ understanding of the artist, helping us to cement Derby Museums as the go-to place for the study and appreciation of Wright’s work on both a national and international level.’

Tony Butler, Director of Derby Museums said: ‘The acquisition of this painting is a triumph for Derby Museums. The work has never been in public ownership having remained in private hands since it was executed in a studio not far from where Derby Museum and Art gallery is now. We feel a palpable sense of “bringing Joseph Wright of Derby back home.’

‘It has been a remarkable achievement for a regional museum organisation like Derby Museums to  secure the funding to save this wonderful painting for the nation. I thank Arts Council England for their support via the Acceptance in Lieu “hybrid offer” scheme, which then helped us unlock funding from the Art Fund, the National Heritage Memorial Fund, The Headley Trust, Omnia Art and a number of generous individuals and organisations. We have also been touched by Derby Museum supporters, many of whom have made incredibly generous donations.’

Edward Harley, OBE, Chairman, Acceptance in Lieu Panel, said: ‘I am delighted that Derby Museums has been allocated this remarkable work which depicts on one side Wright’s self-portrait, the only surviving version which shows him as a practicing artist, and on the other side a preliminary study for his famous An Experiment on a Bird in the Air Pump. It is fitting that the painting has been allocated to Derby where the artist was based for most of his career. The painting demonstrates the close bond that Wright had with his patron, Thomas Coltman, to whom the artist gave this work. The portrait of Coltman and his wife Mary (National Gallery) counts among the artist’s greatest achievements.’

Arts Minister Lord Parkinson said: ‘It is wonderful that this rare self-portrait by Joseph Wright has been saved for the nation and acquired by Derby Museums. Thanks to the Government’s Acceptance in Lieu scheme, this fantastic piece will be exhibited at Derby Museum and Art Gallery where it will take pride of place in the world’s largest collection of his works.’

Dr Simon Thurley CBE, Chair, National Heritage Memorial Fund said: ‘The National Heritage Memorial Fund is delighted to support Derby Museums with a major donation of £2.3million to ensure that this magnificent self-portrait joins their collection. This painting has been privately owned since the 1770s and rarely exhibited, so we are very proud that thanks to our grant this work by Joseph Wright, one of Britain’s most brilliant and compelling eighteenth century painters, will be on display at Derby Museum and Art Gallery for all to enjoy.’

Jenny Waldman, Director of Art Fund, said, ‘Art Fund is delighted that this remarkable painting, which has been in private hands for the past 250 years, will now be on public display at Derby Museum and Art Gallery for all to enjoy. It is very exciting that the work is joining the museum’s exceptional Joseph Wright collection, enhancing audiences’ understanding of the artist’s career, with the verso giving a unique insight into his process. Thanks to the generosity of our members, Art Fund is able to support new acquisitions that build museums’ collections for public benefit.’

Derby Museums is very grateful to Omnia Art Ltd, the independent art advisers, who took advantage of the Acceptance in Lieu Scheme to ensure the painting came to the museum. Omnia recognised that there was nowhere more appropriate to hang Joseph Wright’s Self Portrait than at Derby, where it can now be displayed amongst his most famous paintings.

Find out more about the Joseph Wright collection here.

Find out more about the Joseph Wright Study Room here.

The painting will be available to view in the Joseph Wright Gallery from Tuesday 17 May, as per opening times at the Museum and Art Gallery.