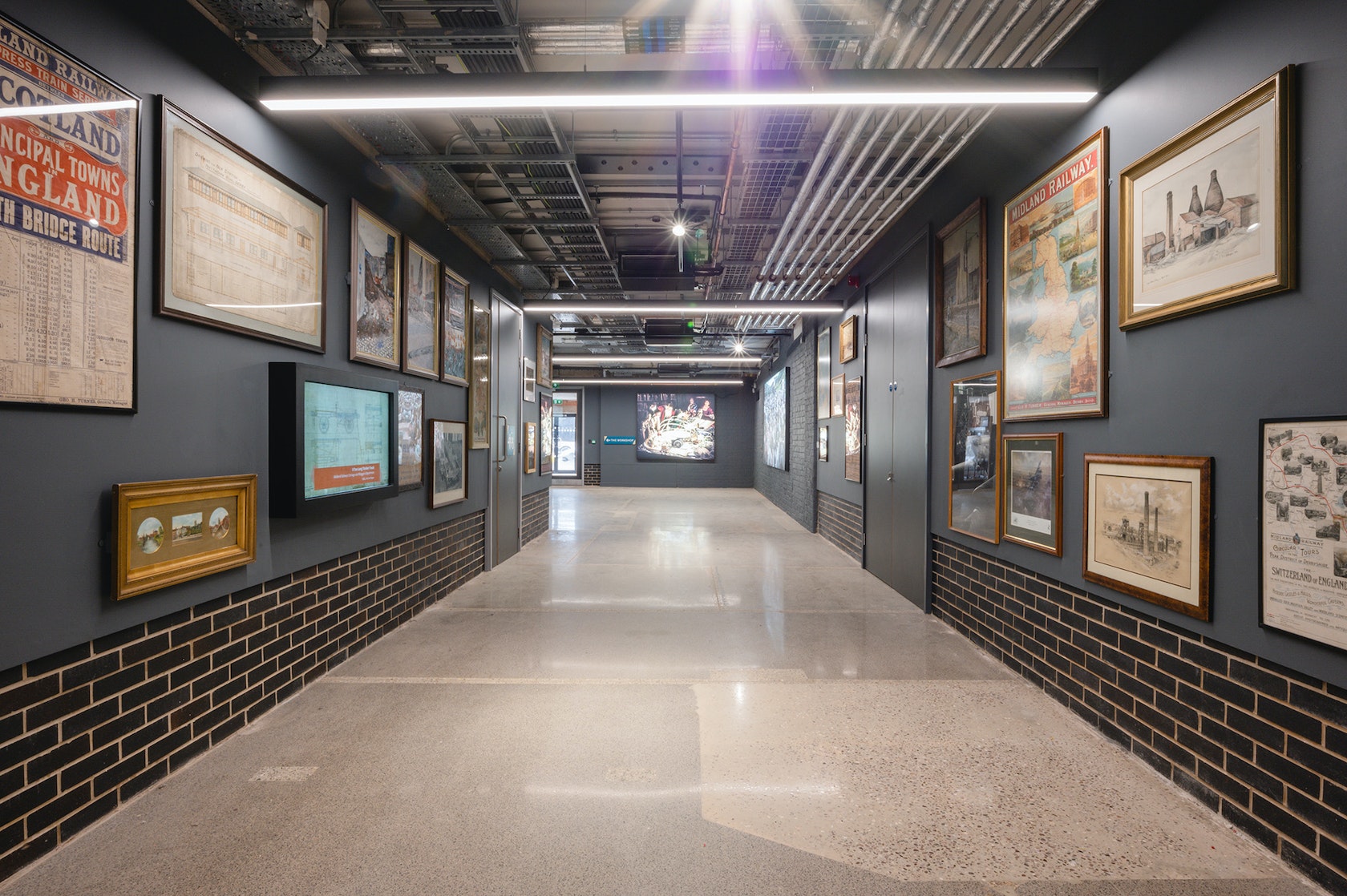 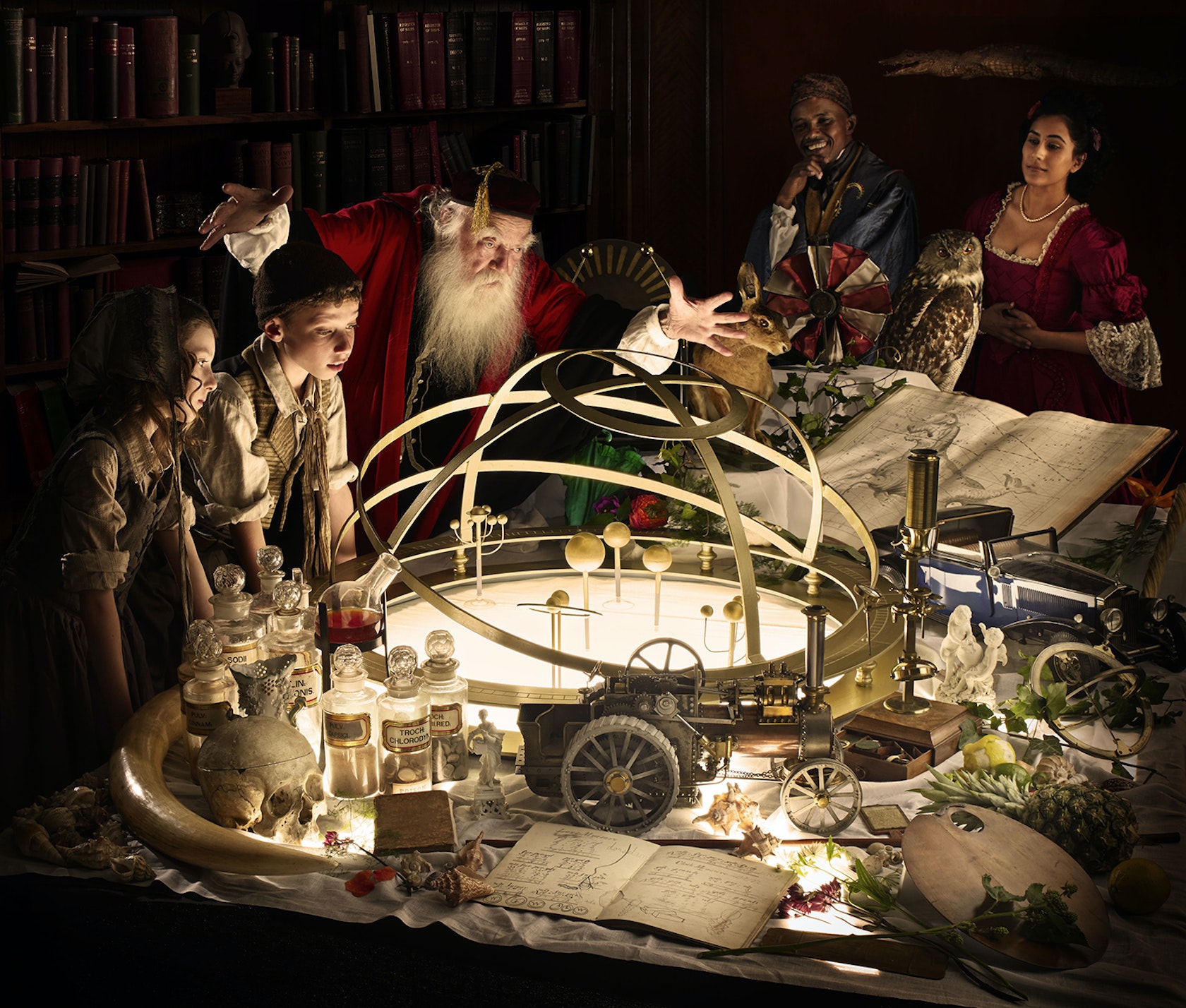 This work takes as its starting point Joseph Wright of Derby’s ground-breaking painting, ‘A Philosopher Lecturing on the Orrery’ (1766). Wright is known for his works depicting marvels of scientific discovery during the Enlightenment. Derby Museums is home to the world’s largest collection of works by Joseph Wright and the original ‘Orrery’ is part of the collection. 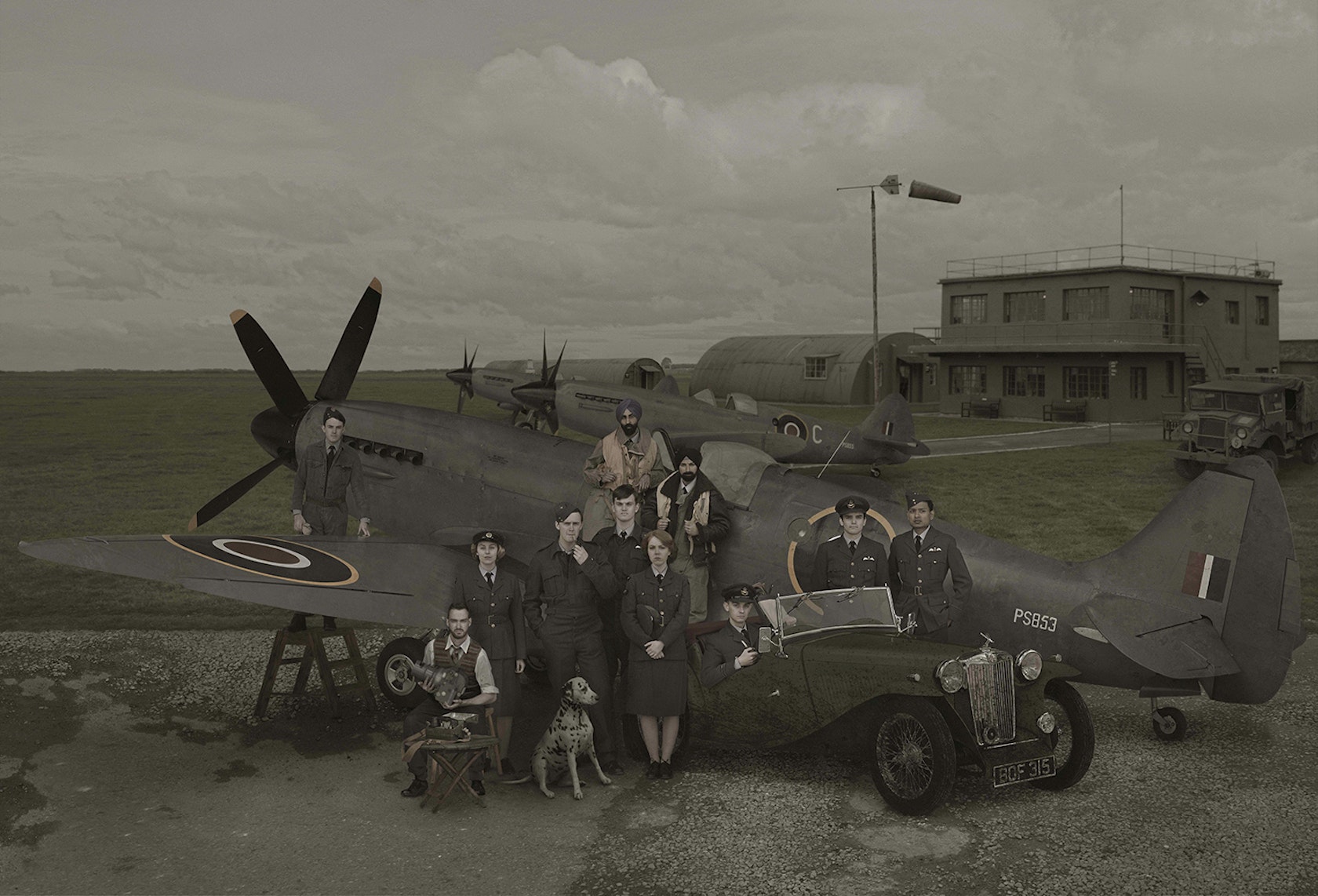 Rolls-Royce Merlin engines were developed in Derby to power Spitfires, playing a significant role in the victory of the skies in 1945. This piece honours all those who flew Allied planes during the Second World War, bringing together Sikh pilots and Royal Air Force crew, who fought together in the combined Allied forces. 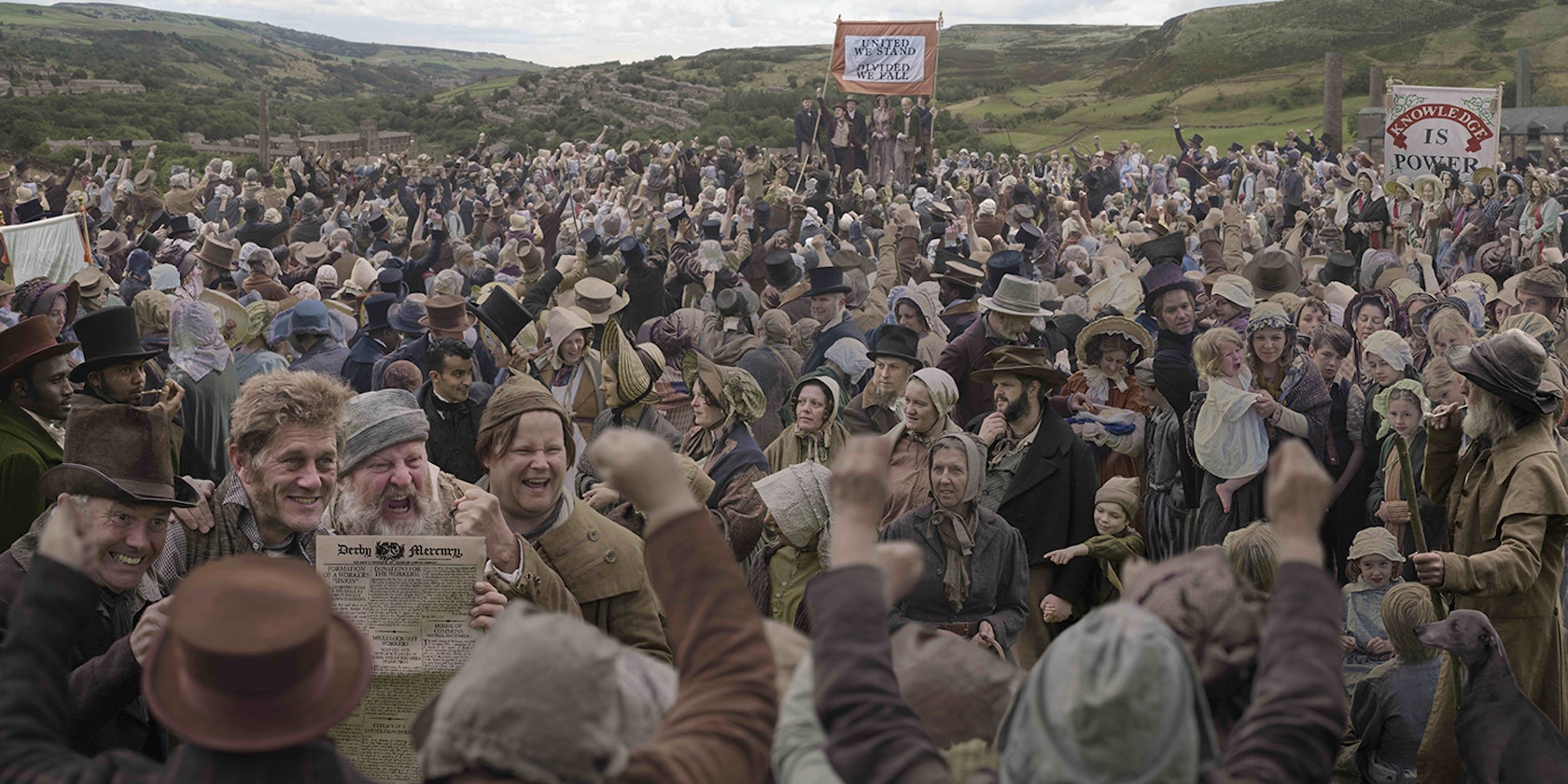 In 1833-1834 disputes at Derby’s silk mills after the dismissal of a worker led to The Derby Lockout. Months of unrest pushed workers and their families into poverty. This was Britain’s first major industrial dispute, captured the attention of the nation and is still remembered as having a lasting legacy by many people in Derby.
About the collection

The Old Shop is home to Artist/Photographer Red Saunders’ three new epic works in his Hidden series, which recreate decisive moments in Britain’s struggle for equality, democracy and social justice – a history of the UK not commonly presented in history books.

What can I see?

View the three tableaux vivants (living pictures) in the Hidden/Derby series, created by Artist/Photographer Red Saunders. Red Saunders is an activist and founder of Rock Against Racism. Red has captured many of the defining moments in British cultural history over the past 50 years, and has now worked with Derby Museums and local people on the Hidden/Derby project.

What can I do?

Find yourself or people you know in the images! The models are all local people who were recruited via a casting call to enact and recreate stories of innovation and disruption from Derbyshire’s past. This mass community involvement included people of all ages and backgrounds, many with a personal or political connection to the events depicted.

What can I learn?

Learn about the stories depicted in the images. Three moments in Derby’s social history that helped shape modern Britain have been reimagined in these images: the importance of scientific innovation in the Enlightenment as forged within the industrial heartlands of the Black Country; the allied pilots and crew of planes who played a decisive role in the Second World War; and the moment workers were locked out of the Derby silk mills in 1833-34 – Britain’s first major industrial dispute and the beginning of the Trade Union movement. These stories show our shared heritage of struggle and resistance, they are reflective of the current mood of social change in the UK, with debates around identity, protest and freedom of speech playing out in the media and the political sphere, these historical moments feel more relevant than ever.

Hidden/Derby is supported by funders of the Museum of Making with additional support from Rolls-Royce and UNITE the Union. 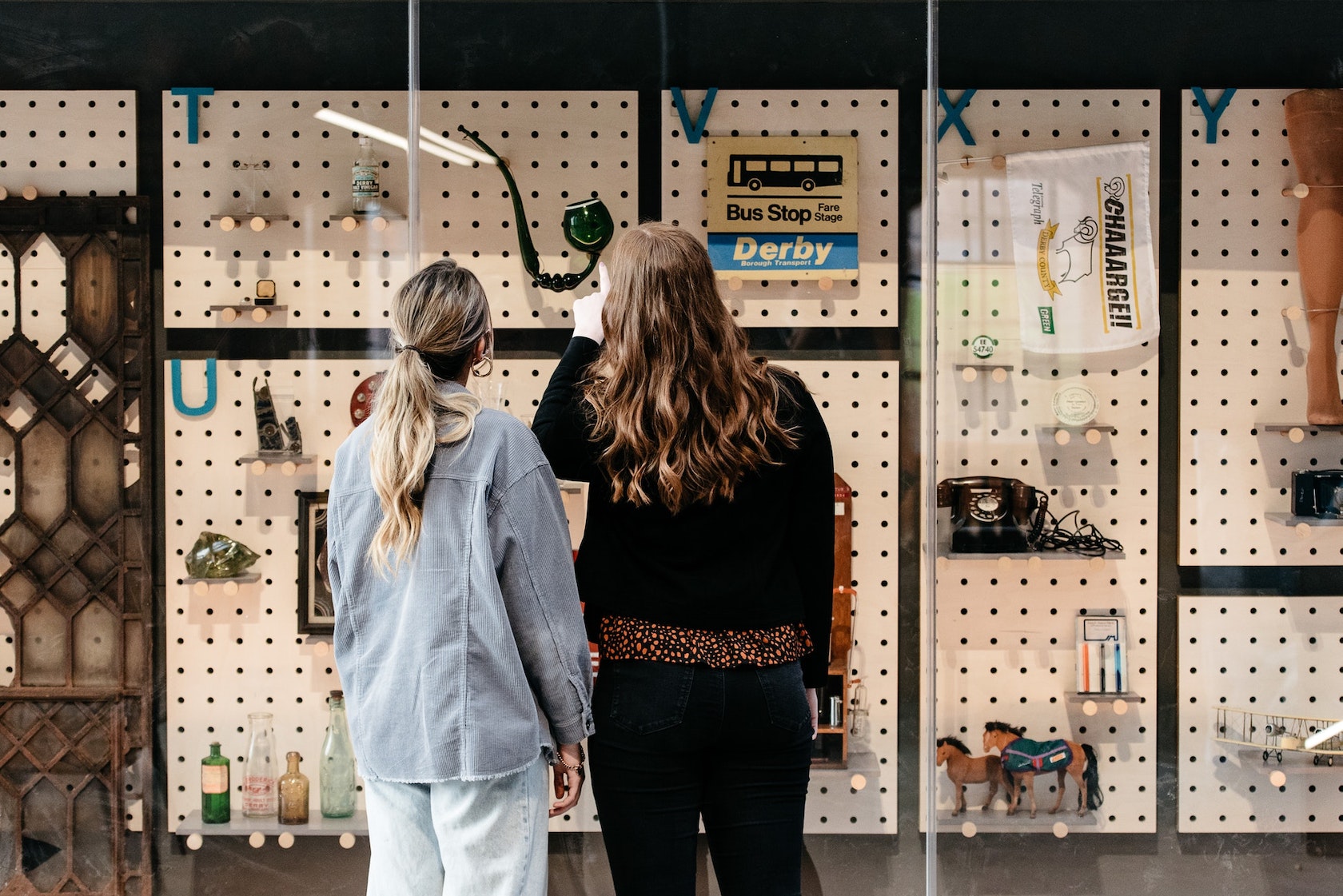 Explore our Collections and Galleries

From the world’s smallest engine run using a human hair, to a seven tonne Rolls-Royce Trent 1000 engine, find out more about the collections at the Museum of Making. 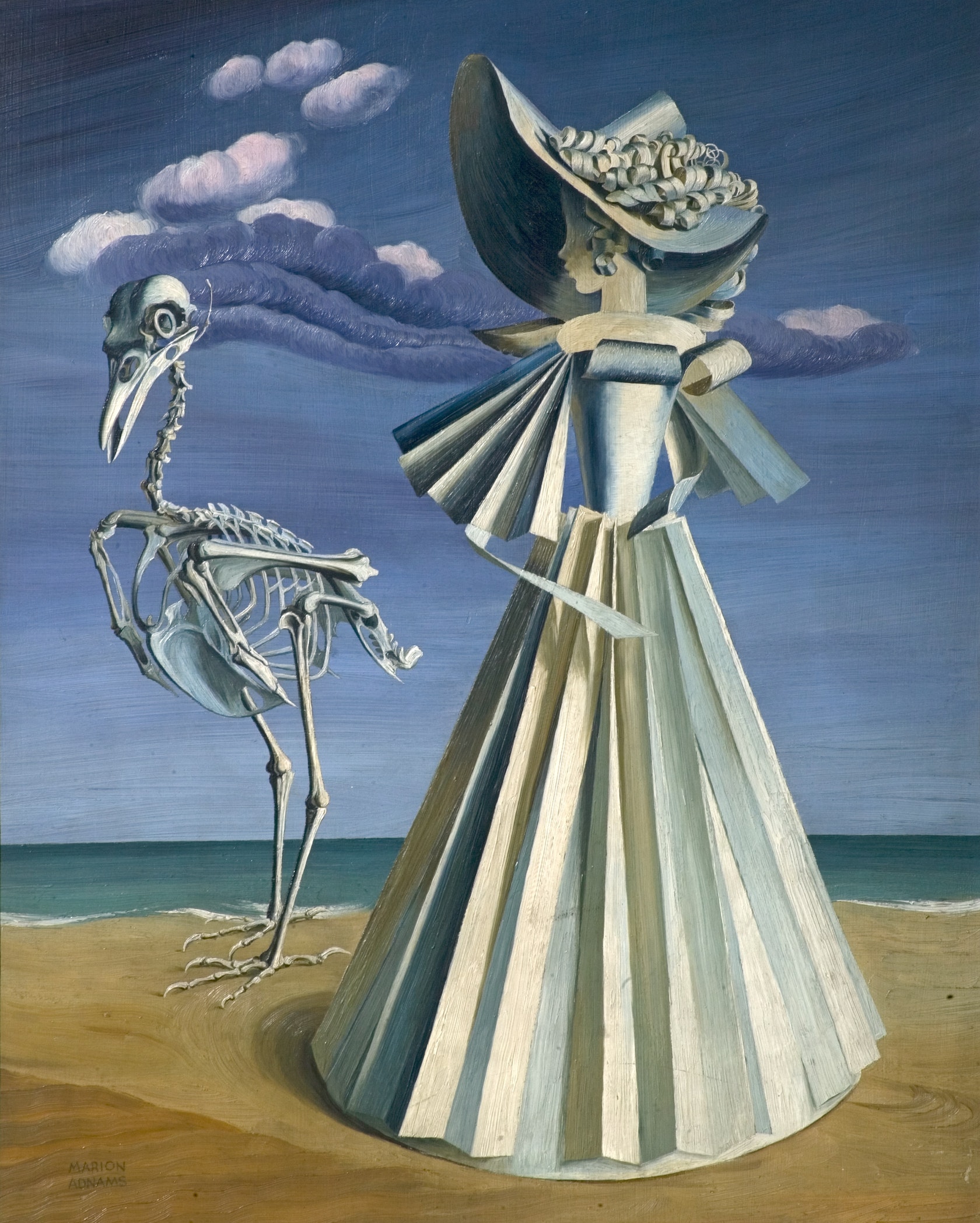 Take a look at our wider collection of Fine Art, some are available to buy as prints.