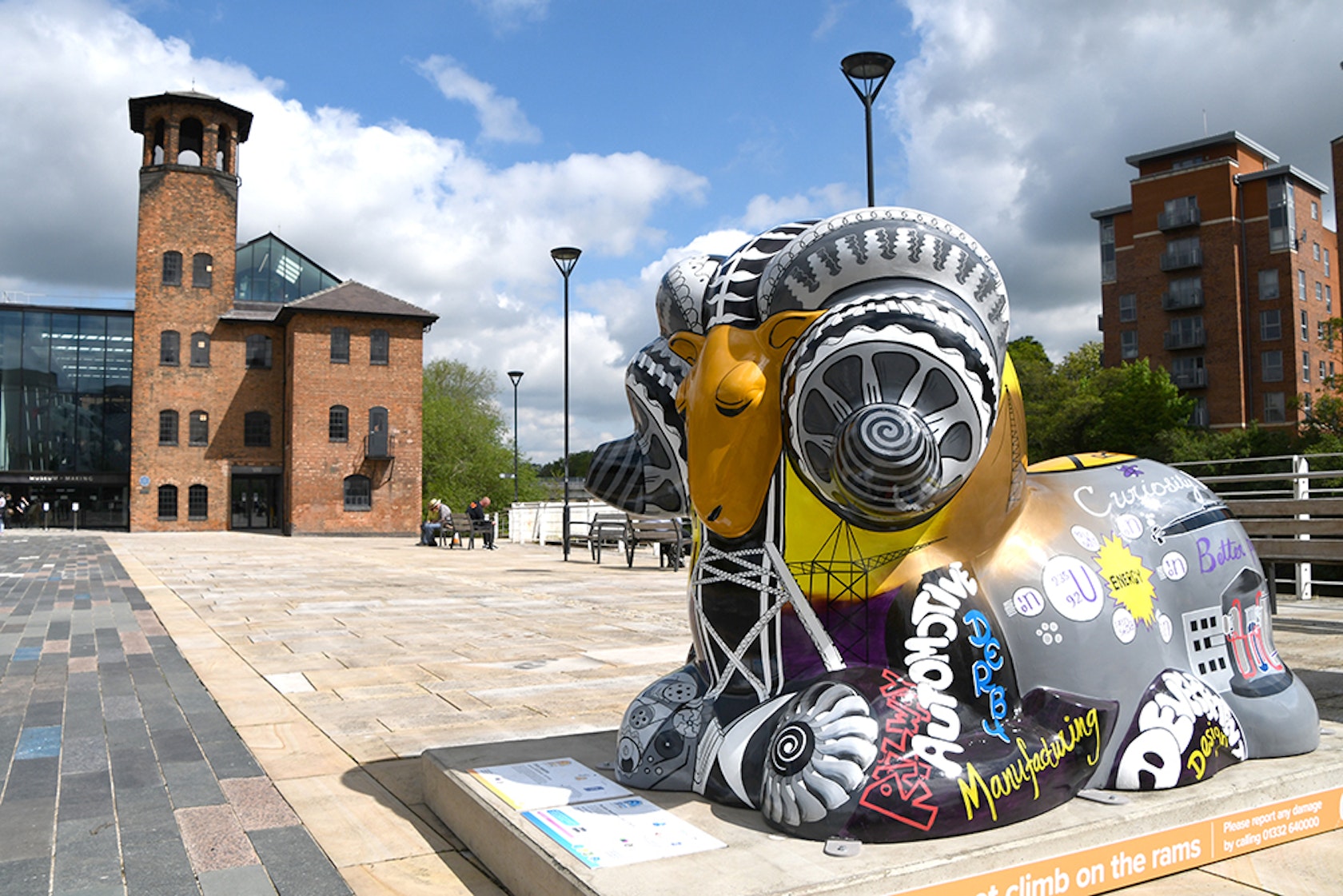 A new report on the Derby Ram Trail has been published by Derby Museums this week, detailing the project’s positive impact on the city’s recovery following lockdown.

Launched in May 2021, in the same month as the new Museum of Making, the Derby Ram Trail was delivered by Derby Museums in partnership with Wild in Art, presenting partner Derby’s Cathedral Quarter Business Improvement District (BID) and trail partner St Peters Quarter BID as the city emerged from the final Covid lockdown.

This spectacular free sculpture trail invited people to find 30 colourful rams dotted around the city centre, all sponsored by local organisations and businesses. It encouraged people to get back into their communities, to explore new areas and to support local businesses, putting Derby Museums in the vanguard of the city’s recovery after lockdown.

The report, which includes the findings of a public survey, details the trail’s positive impact across several areas, strengthening the case for culture as a key driver in making Derby a vibrant place to live, work, visit and invest. Key findings include:

The Derby Ram Trail culminated in a public auction, hosted by celebrity auctioneer Charles Hanson, which saw all 30 ram sculptures auctioned off to raise an impressive £172,000 for Derby Museums’ Endowment Fund (doubled to 344,000 with match funding from the National Lottery Heritage Fund).

“Bringing the Ram Trail to Derby has been a great way to galvanise local businesses and artists to create a fun and accessible focus in the city centre at a time when it was needed the most. After an arduous lockdown, the trail helped many people to reconnect and rediscover their city.”

“The impact of the trail, led by Derby Museums, on the city’s recovery proves the incredibly important part culture has to play in the life of a city. We would like to offer our thanks to all of the sponsors, artists, funders, schools, organisations, individuals and volunteers who came together to help us realise this fantastic project.”

“Derby is a city that has always had creativity and innovation at its heart, and we believe that every resident and visitor should benefit from the power of arts and culture to make change for the better. Culture is fundamental to Derby’s ambition to create a confident, diverse economy, and a place of health and happiness. The positive impact made by the Derby Ram Trail is another good example of how important culture can be for our city, and it is projects like this that show our bid for City of Culture 2025 to be all the more pertinent.”

“The Derby Ram Trail created a feel-good factor right across the city. Our aim was always for the trail to bring real value to Derby as the host city, as well as raising funds for Derby Museums’ Endowment Fund and I’m delighted to see the results of the evaluation. The figures clearly show the impact which happens when the business and creative sectors join forces.”

The Derby Ram Trail drew to a close on 25 August 2021, but remains accessible through a legacy app, which enables people to continue navigating the trail via mobile to find 3D virtual images of the rams in their original positions. Created by trail partners, Bloc Digital, the app had been updated on over 4,800 devices by the end of 2021 and continues to be freely available as a way for residents and visitors to interact with the city. Thirteen of the 15 rams that remained on public display after the trail, can also still be spotted around Derby.

The BIDs’ support reflected the positive impact that the trail would have on the two areas where the majority of the sculptures were situated.

In a joint statement, Martin Langsdale MBE, chair of the Cathedral Quarter BID and Helen Wathall MBE, chair of St Peters Quarter BID said: “The Derby Ram Trail 2021 brought some much-needed colour, pride and sense of community to the city centre and we were delighted to support this initiative.

“The trail was an important part of the overall work to encourage people safely back into the city centre and was greatly appreciated by businesses in both BID areas – many of whom embraced the additional activities that we organised to further enhance the visitor experience.”

Culture Derby is now preparing Derby’s bid for UK City of Culture 2025. Run by the Department for Digital, Culture, Media and Sport (DCMS), the title is awarded every four years, with the winning city creating a year-long cultural celebration which is rooted locally and has national significance.

Culture-led regeneration will be the cornerstone of Derby’s bid. Recognising that culture is fundamental to the city’s recovery, and its ambition to create a confident, diverse economy, and a place of health and happiness.

A summary of the report can be found on Derby Museums’ website here.